The future of writing: augmented writing software – Part 1: How it all began 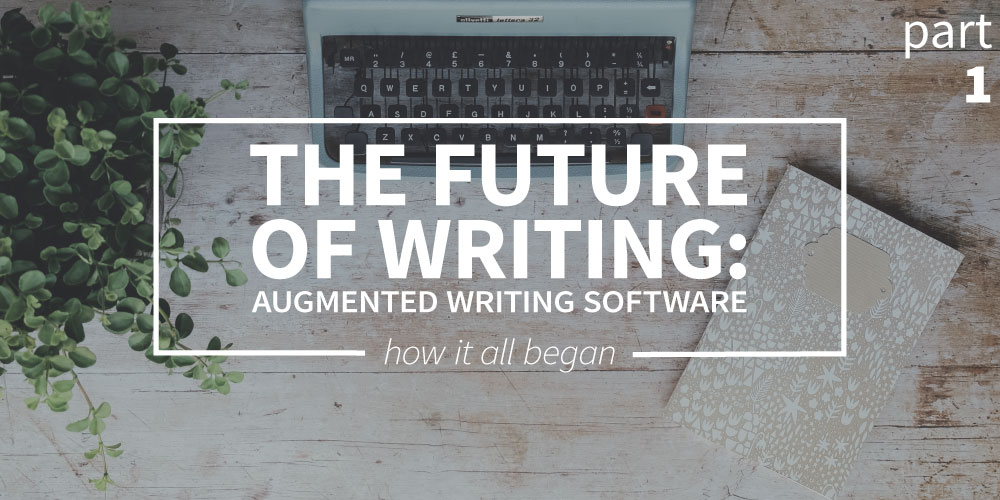 How artificial intelligence changes the way we work

The number of technologies that shape the future of communication keeps on growing. Some of them, like chatbots and gamification, are widely accepted. Others, like holograms and telepathic communication, still seem to be a bit too sci-fi for daily use. All these technologies have one thing in common; they rely on artificial intelligence. It greatly reshaped the way we communicate in business, and it has made our work a lot easier and more efficient.

One of the latest developments in artificial intelligence is augmented writing. Before we tell you more about what it is and how it can help you improve your writing, we want to share a brief history of writing software. A trip down memory lane so to speak, and a way to ease you into the idea of software helping you while you’re writing.

We first started using software to help us write after the introduction of IBM’s personal computer. WordPerfect was the writing software that was most widely used. It made writing so much easier than using a typewriter. It’s hard to imagine just how revolutionary it was. Using WordPerfect made it possible to move text from one place to another and to make corrections while writing. You could check your spelling and even easily add formatting like bold or italic with special formatting codes. None of this was possible on a typewriter.

What you see is what you get

WordPerfect was just the beginning. When Apple and Microsoft introduced its operating systems with a graphical user interface new possibilities presented itself. It was the era of the so-called WYSIGYW (what you see if what you get). On your screen, you could see exactly what a document would look like in print version. Microsoft Word was the first writing software to take full advantage of this new technology. It was now possible to see what a printed page would look like right there on the screen. You didn’t have to use formatting codes anymore, like in WordPerfect. On top of that, it was possible to include graphics and tables, and you could choose different fonts and easily change the colors and size of the font.

Then the introduction of the internet brought new changes to the writing software. The focus shifted from formatting to working together, it was centered on people and collaboration. The first software that made it easy to share documents with colleagues, family, and friends was Writely. When it became successful, it was quickly bought by Google. Soon after, Google Docs was introduced; writing software that can be used by several people in the cloud. This so-called collaboration-first word processor made it possible to have multiple people type at the same time, in the same document, in real-time. Google Docs doesn’t have as many features as Microsoft Word does, but still, it became extremely popular and widely used over a short period of time.

All the writing software that was introduced over the past decades made writing easier, reduced the number of mistakes and made it possible for people to work together. What it didn’t necessarily do though, was making your writing better. Of course, a spell check and working together can improve your writing but it doesn’t necessarily make you a better writer. That’s where augmented writing comes in.