5 ways to prevent gender bias in your recruitment process 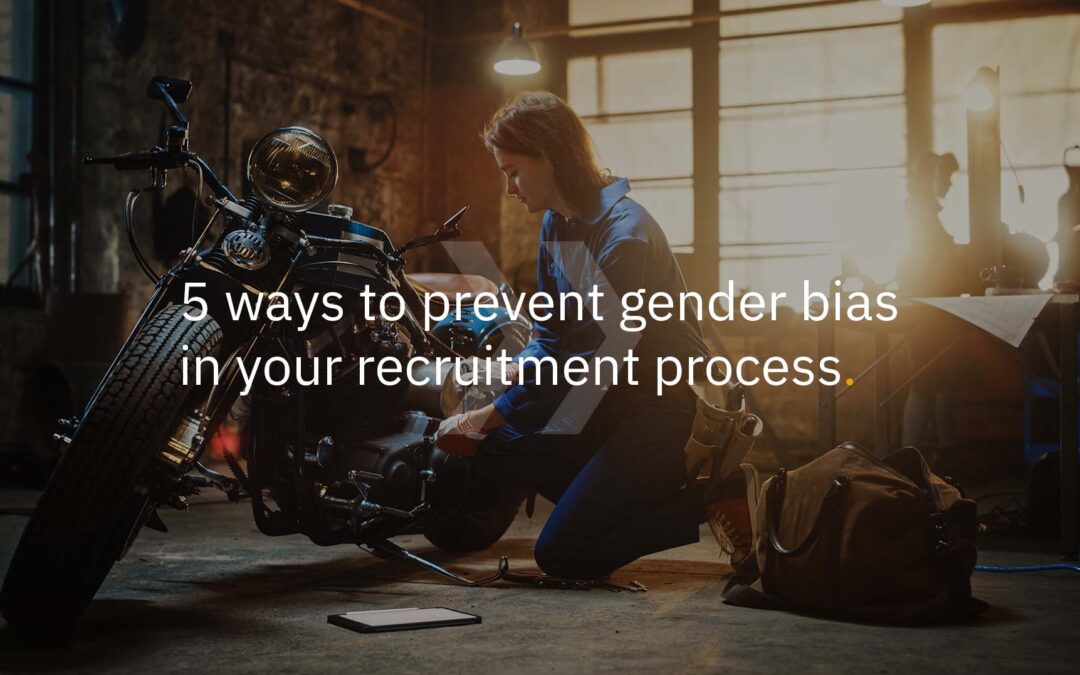 In 2022, we still have to deal with exclusion within the recruitment process. Most of the time people are not aware of for example gender bias in their process. Therefore, it’s getting more and more important to make everybody aware of gender. In this whitepaper we will talk about the 5 easiest ways to prevent gender bias in your recruitment process. Because you also want to hire the perfect candidate, right?

Gender bias in the recruitment process

In the recruitment process, gender bias refers to the discriminatory treatment of candidates based on their gender. For example, recruiters might choose a male candidate because of some characteristics they think are typically male. They might look for candidates that are analytical thinkers and emotionally thorough. And some recruiters will attribute these characteristics to men. Therefore, they will select a male candidate for this job. Women, however, could be equally suitable.

5 ways to prevent gender bias in your recruitment process

Unconscious bias is very much related to gender bias in the recruitment process, as we discussed above. It’s a social stereotype recruiters have about certain groups of people.  An unconscious bias is formed outside the conscious awareness. An example of an unconscious bias is that women are not suitable for a very technical job. Or that men don’t want to work in a caring profession.

The problem with unconscious bias is not knowing that you have it. Without knowing, there is no way to get rid of it. You should offer training for recruiters on unconscious biases to solve that problem.

Almost all recruiters have the above-mentioned unconscious bias (which is why training is necessary). But it’s an even bigger problem when the HR team isn’t diverse. All-male HR teams might be even more biased against women. Therefore, you should strive to have as diverse and inclusive a team as possible. There should be recruiters from different backgrounds and genders to write job ads and review candidates.

AI is a very useful technology to remove gender bias from the recruitment process. Recruiters can use it to screen, rank and grade candidates. The gender of candidates can also be disregarded. AI is software, so it can be programmed to analyze everything but a candidate’s gender.

We’ve seen that job ads often have a more masculine tone of voice. The language used is why women feel less motivated to apply. Words that we frequently see used are “competitive,” “analyze,” and “determined”. These are more masculine words. If recruiters use these, they may cause women to feel excluded from the recruitment process. For the same reason, you shouldn’t use “he” in a job ad. It’s better to use “he or she” or the more direct “you” or “your”.

The job title should also be gender-neutral. Job titles like “hacker,” “guru” or “superhero” often appeal to men but not to women. The last thing you should consider is the list of requirements for the job. Most women strive to meet them all. If they don’t, they won’t apply. So, you should be careful not to list too many requirements.

Why is it important to prevent gender bias?

Gender bias is a problem because it has a negative effect on the level of diversity in your company. You will never reach those ambitious diversity and inclusion goals if there is gender bias in your recruitment process. Besides that, it’s simply unfair to exclude candidates (mostly women) because of their gender. Employees should be assessed solely on their skills and qualifications. Gender bias also means missing out on very talented candidates who could be a real asset to your company.